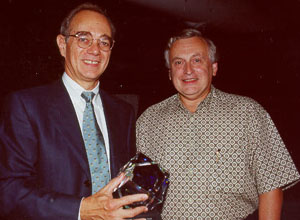 During the Graduate Fellowship Program Annual Conference Banquet and again at TECHCON 2000, Professor Rafael Reif, of the Massachusetts Institute of Technology, was presented the Aristotle Award in recognition for his commitment to the educational experience of SRC students and the profound and continuing impact he has had on their professional careers.

In reviewing the nomination of Professor Rafael Reif, the Awards Committee was struck by the unanimity of views from the contributors to the nomination. The letters conveyed clear respect for his technical expertise, noting his leadership in building the Microsystems Technology Laboratories at MIT and an Engineering Research Center focused on environmental issues related to semiconductor manufacturing. But the highest praise was for his abilities as teacher and mentor. There was strong agreement that he possesses an unusual talent for combining sincere friendship with strong mentoring in advising his students. His methodology is based on the premise that students need time to build self confidence, to learn at their own pace, and to have room to explore and make mistakes.

One former student noted that he "is the hardest person that I have ever had to work for." But this and other students also spoke of his demonstrated "trust in their judgement" and "the trust and respect he extended to this students." They further reported being "pushed to lead," and being given the "latitude to explore and define their own projects." One international student talked about his "patient guidance and persistent encouragement" and his "warm heart helping foreign students to overcome language and culture barriers." Another spoke of accepting an offer to join Professor Reif's research group "without knowing that he would be my advisor and mentor for life."

Almost without exception the contributors to Professor Reif's nomination spoke of his insistence that his students develop strong relationships with industry. "He always acts as a bridge between his students and semiconductor companies." His research program is strongly mentored and his students are the beneficiaries of this industry involvement. The constant exposure to industry instills a culture of relevance and a strong desire to make an impact on the semiconductor industry. He was one of the first faculty members to have his students speak at SRC reviews demonstrating the trust he places in their ability to present their research results. His students are highly sought after by industry because they graduate with a very well-rounded perspective and know how to communicate and lead.

Another former student spoke at length of Professor Reif's "unwavering commitment to the highest ethical standards and his ability to instill those standards in his students by example." He is described as being "politically adept" but "never divorced from his sense of honesty and integrity." The notion that "being fair, up-front, and honest in one's dealing with other individuals is a cornerstone of long term success and respect within one's community" clearly left an indelible impression on this particular student.

A former Reif student, now an outstanding professor in his own right, reported, "Professor Reif told me that the most important duty of a professor is educating students and professors are judged by the successes of their students." Another said, "I try to be like him, taking good care of students." And a voice from industry noted, "the track record of his students speaks volumes about his ability to educate professional engineers."

Professor Reif has graduated some 40 Master's students and over 30 Ph.D.s, including three SRC Fellows. Apparently they have never forgotten the lessons on leadership and responsibility learned from Professor Reif because they are leaders in industry and in academia making outstanding contributions in their chosen areas.

Since the Aristotle Award was authorized by the SRC Board of Directors in 1995, it has been presented to an illustrious group of faculty including:

This list speaks to the outstanding quality in teaching exemplified by the Aristotle Award.

The 2000 recipient adds yet another outstanding teacher to this distinguished list of Aristotle Award winners.