Note: The 2002 Aristotle Award was presented to Professor Alberto Sangiovanni-Vincentelli, UC/Berkeley, at the Graduate Fellowship Program Annual Conference at the Hyatt Regency at Reunion, Dallas, Texas, September 23, 2002. The following is the presentation given by Larry Sumney, SRC President and CEO.

A primary goal of the SRC is to produce advanced degree students with the capability to work effectively in the semiconductor industry. The Aristotle Award â€¦ recognizes SRC-supported faculty whose deep commitment to the educational experience of SRC students has had a profound and continuing impact on their professional performance and consequently a significant impact for members over a long period of time. The Aristotle Award is intended to acknowledge outstanding teaching in its broadest sense, emphasizing student advising and teaching during the research project thereby contributing to the maturation of the student. 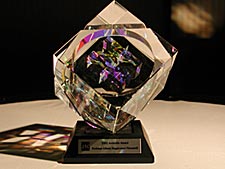 In reviewing the nomination package for Professor Sangiovanni-Vincentelli, several themes emerged in the nomination and in the supporting letters. As a lecturer, he is described as "enthusiastic," "engaging," "energetic." One letter noted, "He paints a larger picture and makes that picture seem accessible." His lectures were sufficiently inspiring to cause a number of students to change their course of study so they could do their research as his advisee. As one student said, "No one fell asleep in his class."

A second theme that emerged was the insistence on research that matters, that can be transferred to industry and advances the state of the art. As one former student put it, "He taught us that good science and good business can live happily together." In his research group, it is "not sufficient that the student achieve a good experimental results. The ideas of the student have to be relevant and practical." Without exception, the letters referred to Professor Sangiovanni-Vincentelli's connections to industry as driving the practicality of their research, providing synergy that created a bounty of new ideas, and leading to internships that started them on their professional careers well ahead of others in their peer group.

The third theme running through the nomination package was that of learning to communicate research results. One former student noted that "conferences are a natural part of work," and " putting together and delivering a good presentation represents a mechanism by which to organize one's thoughts." They also spoke of the untold hours spent with Professor Sangiovanni-Vincentelli rehearsing, rewriting, practicing until HE was satisfied they would do a creditable presentation.

Finally, students spoke of his accessibility, of always being available for his students long after they are his students, and of his high ethical standards. More than one mentioned his teaching by example. Said one, "Alberto showed by example that it is important to follow a principled approach to research, an approach based on openness and honesty. He taught his students that an essential ingredient to leadership is trust." They also spoke of his respect for his students, of his ability to guide and still treat them as peers, and his constant "grooming them for excellence."

One student summed up his teaching abilities as follows: "His incredible energy, intelligence, knowledge, dedication, and productivity have positively influenced a great number of SRC students and have had a profound and continuing impact on their professional performance." It is with great pleasure that the SRC presents the 2002 Aristotle Award to Professor Alberto Sangiovanni-Vincentelli.