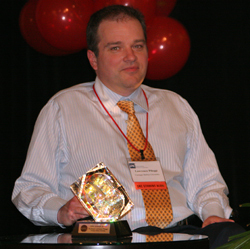 [Note: The following is the presentation of the 2008 Aristotle Award by Larry Sumney, SRC President and CEO, made via video at TECHCON 2008.]

The capability to positively impact the lives of their students is a unique opportunity and privilege of university faculty. This is a high calling that requires that faculty dedicate themselves to the preparation of their students, not just in the sciences, but also to create in them a larger world view on the use of their skills for the well-being of humanity. The careers of some faculty demonstrate an exceptional and unique commitment to the preparation of their students. We are here tonight to acknowledge the contributions of one such faculty member through the presentation of the 2008 Aristotle Award.

"A primary goal of SRC is to produce advanced degree students with the capability to work effectively in the semiconductor industry. The Aristotle Award recognizes SRC-supported faculty whose deep commitment to the educational experience of SRC students has had a profound and continuing impact on their professional performance and, consequently, a significant impact for members over a long period of time. The Aristotle Award is intended to acknowledge outstanding teaching in its broadest sense, emphasizing student advising and teaching during the research project thereby contributing to the maturation of the student."

The Aristotle Award was authorized by the SRC Board of Directors in 1995 to recognize professors who best contribute to the development of the industry's most valuable resource, its human resource. The list of winners of the Aristotle speaks volumes about the quality of SRC researchers and the high standard set for SRC students. The awards have been made to some of the most exemplary university faculty in this country, and this year's award continues that tradition. Professor Lawrence Pileggi is eminently qualified to receive the 2008 Aristotle Award.

When we construct the presentation for the Aristotle Award, we look for themes in the nomination and supporting letters. What strong characteristics make this candidate stand out from a group of the world's leading faculty? Are there one or two character traits that make this person who he is? In the case of Professor Pileggi, his supporters agree on those traits: advocating the pursuit of real-world problems, strong support for and mentoring of his students, and unparalleled technical expertise.

All of the supporting letters for Professor Pileggi's nomination spoke of his strong ties to industry and the impact that has on his students by adding valuable industry perspective to academic research. According to one former student, "A unique quality is this ability to take on large challenges that have industry-wide impact. I personally benefited more from this risk-taking quality than any other aspect." His strong and broad relationships within the industry provide internships and job opportunities for his students and also help with the early deployment of their research. One former student spoke of his "enthusiastic maturing of students via various community and industry interactions."

His former students also spoke in concert of his strong support and mentoring. One said, "Professor Pileggi never discouraged me from experimenting even when he knew I was not moving in the right direction." Another spoke of "an atmosphere of open debate [that] influenced not only our technical skills but also the process by which we approached challenges." One also spoke of the "decent food" in his weekly team meetings - priorities! And the mentoring continues after completion of the degree according to one former student who said, "He is as accessible as he was 12 years ago."

According to his students, this interaction with industry and his mentoring skills work so well because of his unparalleled technical expertise. This is what makes it possible for his group to take on the big challenges and be successful. Perhaps this is a good place to recognize that Professor Pileggi is himself a student alum of the first SRC research program at Carnegie Mellon and his technical expertise has been evidenced by two SRC Technical Excellence Awards and several Inventor Recognition Awards.

Finally, one student noted, "If there is a common theme among Larry's students, it is that they are influential in providing much-needed innovation in our industry." Professor Pileggi, it is with great pleasure that I present you with the 2008 Aristotle Award to you on behalf of SRC and SRC members.