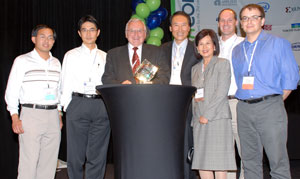 [Note: The following is the presentation of the 2009 Aristotle Award by Larry Sumney, SRC President and CEO, at TECHCON 2009.]

The Call for Nominations for the Aristotle Award begins as follows: "A primary goal of SRC is to produce advanced degree students with the capability to work effectively in the semiconductor industry. The Aristotle Award recognizes SRC-supported faculty whose deep commitment to the educational experience of SRC students has had a profound and continuing impact on their professional performance and, consequently, a significant impact for members over a long period of time. The Aristotle Award is intended to acknowledge outstanding teaching in its broadest sense, emphasizing student advising and teaching during the research project thereby contributing to the maturation of the student."

The Aristotle Award was authorized by the SRC Board of Directors in 1995 to recognize professors who best contribute to the development of the industry's most valuable resource, its human resource. The list of winners of the Aristotle speaks volumes about the quality of SRC researchers and the high standard set for SRC students. The awards have been made to some of the most exemplary university faculty in this country, and this year's award continues that tradition. Professor Chenming Hu is eminently qualified to receive the 2009 Aristotle Award.

The capability to positively impact the lives of their students is a unique opportunity and privilege of university faculty. This is a high calling that requires that faculty dedicate themselves to the preparation of their students, not just in the sciences, but also to create in them a larger world view on the use of their skills for the well-being of humanity. The careers of some faculty demonstrate an exceptional and unique commitment to the preparation of their students. This commitment was clearly recognized by the former students who contributed to the nomination Professor Hu; they spoke with one very clear voice: "I would not be where I am today without his guidance and support."

All of the supporting letters for Professor Hu's nomination acknowledged his unparalleled technical expertise and his strong ties to industry and the impact that has on his students by adding valuable industry perspective to academic research. But they centered their comments on more personal interactions.

Once former student noted, "I came to Berkeley as a terminal MS student, without interest in a PhD. However, [Professor Hu's constant positive outlook and encouragement, along with the excitement of the research I was pursuing under him, showed me that academia is an extremely rewarding career. Years later, I remain deeply indebted to him for my own successful academic career." That comment came from Professor Dennis Sylvester who has participated quite successfully in both GRC and FCRP research since 2001.

And from Professor Elyse Rosenbaum, "I attribute my own success as a researcher and an academician to the training I received from Professor Chenming Hu." Elyse was one of several students who, along with Professor Hu, received one of SRC's first Technical Excellence Awards in 1992. She has participated in GRC research since 1995.

The nominators did not just recognize Professor's Hu's influence; they had very clear ideas about the elements of that influence. "If I had to pick the one critical point that I deeply appreciate from the interaction with Professor Hu, it is the confidence in my research capability that he helped me build up step by step. Without his constant encouragement and trust, I would not have been able to continue my academic career to this stage." This comment came from Professor Yu Cao, who has participated in GRC research since 2006.

The influence and guidance of Professor Hu is also evident in students who joined industry. Dr. Leland Chang, now at IBM, wrote, "I left graduate school not as a specialist in a specific area of semiconductor devices, but as a well-rounded researcher with experience in everything from detailed modeling of device physics to particular idiosyncrasies in the fabrication process to circuit and architecture-level device needs."

There were other ideas common among the nomination letters: mentoring, exceptionally high standards, remarkable teaching, placing responsibility on the student, encouraging, guiding, demanding a high level of quality, and incredible patience and humility. Professor Michael Orshansky summed it up this way, "His personal qualities and his leadership have helped several generations of students grow into mature and successful researchers in both academic and industry areas. Professor Hu is a talented, visionary, and caring teacher." Professor Hu, it is with great pleasure that I present you with the 2009 Aristotle Award on behalf of SRC and SRC members.