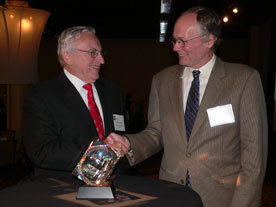 [Note: The following is the presentation of the 2010 Aristotle Award by Larry Sumney, SRC President and CEO, at TECHCON 2010.]

The Aristotle Award was authorized by the SRC Board of Directors in 1995 to recognize professors who best contribute to the development of the industry’s most valuable resource, its human resource.  The list of winners of the Aristotle speaks volumes about the quality of SRC researchers and the high standard set for SRC students.  The awards have been made to some of the most exemplary university faculty in this country, and this year’s award continues that tradition.  Professor Mark Lundstrom is eminently qualified to receive the 2010 Aristotle Award.

The capability to positively impact the lives of their students is a unique opportunity and privilege of university faculty.  This is a high calling that requires that faculty dedicate themselves to the preparation of their students, not just in the sciences, but also to create in them a larger world view on the use of their skills for the well-being of humanity.  The careers of some faculty demonstrate an exceptional and unique commitment to the preparation of their students.  This commitment was clearly recognized by the former students who contributed to the nomination of Professor Lundstrom; they spoke with one very clear voice:  “I would not be where I am today without his guidance and support.”

Professor Lundstrom’s nomination for the Aristotle Award was submitted by an Industry Liaison to his research at Purdue who recognized the uniqueness of students coming from this program.  To quote from the nomination, “One of the unique positions of Professor Lundstrom in advising his students stems from being the founder and the director of the Network for Computational Nanotechnology …Sharing such tools puts Lundstrom’s students in a position of scientific leadership… and allows them very high impact and visibility.”

The former students supporting this nomination also recognized the value of the environment created for them in Professor Lundstrom’s group, and they identified personal qualities that made a significant difference for them.  Sayed Hasan, now at Intel, said, “Professor Lundstrom is a believer in professionalism…His uncompromising attitude towards the quality of research only improved the quality of his students…I learned how much can be achieved if one tries hard.”

And  Jing Wang, now at IBM, remembered a quote from a pamphlet that Professor Lundstrom handed to him as he began his research, “A successful researcher should always be a leader, not a follower.”  And he continued, “Professor Lundstrom always does his best to motivate his students to take a leader’s position in their own research projects.”

His former students also noted the benefit they received from his strong connections to industry and his efforts to help his students find internships for hands-on experience, but they agreed that the biggest impact is his role modeling .  One noted, “I learned more from his presentation and communication than form all those classes.”

One former student concluded this way, “Professor Lundstrom’s influence has been the single most important factor in making me a successful researcher in my professional career.  He is not only an outstanding teacher, but also an unparalleled mentor for any aspiring young researcher.”

Professor Lundstrom, it is with great pleasure that I present you with the 2010 Aristotle Award on behalf of SRC and SRC members.