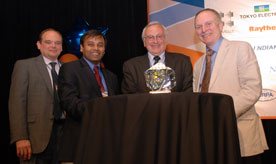 [Note: The following is the presentation of the 2011 Aristotle Award by Larry Sumney, SRC President and CEO, at TECHCON 2011.]

The Aristotle Award was authorized by the SRC Board of Directors in 1995 to recognize professors who best contribute to the development of the industry’s most valuable resource, its human resource.  The list of winners of the Aristotle speaks volumes about the quality of SRC researchers and the high standard set for SRC students.  The awards have been made to some of the most exemplary university faculty in this country, and this year’s award continues that tradition.  Professor Robert Dutton is eminently qualified to receive the 2011 Aristotle Award.

The capability to positively impact the lives of their students is a unique opportunity and privilege of university faculty.  This is a high calling that requires that faculty dedicate themselves to the preparation of their students, not just in the sciences, but also to create in them a larger world view on the use of their skills for the well-being of humanity.  The careers of some faculty demonstrate an exceptional and unique commitment to the preparation of their students.  This commitment was clearly recognized by the former students who contributed to the nomination of Professor Dutton;

they emphasized that he was both an advisor and a friend who creates an environment that allows students to try new ideas and stretch themselves.

They also identified personal qualities that made a significant difference for them.

Dr. Lou Schaffer, former Cadence fellow highlights Prof. Dutton’s unique approach to advising: “He would treat you as an equal in defining a problem and considering how to attack it… Student after student ended up with interesting problems, that they were convinced they picked by themselves and solved by their own hard work. Bob did this by asking questions in such a way that you felt you were explaining to him, when actually he was guiding you by making you consider the right questions. His students would leave with not just a thesis, but the confidence that they could attack and solve interesting problems.”

Dr. Tze Wee Chen, Intel, adds: “Prof. Dutton actively strives to ensure that each of us had sufficient industry interaction by securing an industry mentor, and by stressing technology transfer back to industry. Due to this exposure …I was able to plug right into Intel after graduation, and hit the ground running.”

Professor Mark Law, Associate Dean, U. of Florida , and former SRC Aristotle Award winner reiterated what was mentioned in every nomination letter, the fact that many of Professor Dutton’s students have gone on to influential careers in the IC Industry. Among them are:

Professor Narayan Aluru, Stanford, says he is “indebted to him for the rest of life. Bob is a great intellectual, phenomenal scientist, outstanding engineer, excellent teacher who emphasized fundamentals, built a TCAD lab that produced so many outstanding students who went on to have great careers, superb mentor, a passionate academic and a softball player who likes to win all the time. No one comes close to being another Bob.”

Professor Mitra, concluded his nomination with these words , “We simply cannot think of anyone who deserves the prestigious SRC Aristotle Award more than Prof. Dutton, whom we consider as our Aristotle!”

Professor Dutton, it is with great pleasure that I present you with the 2011 Aristotle Award on behalf of SRC and SRC members.