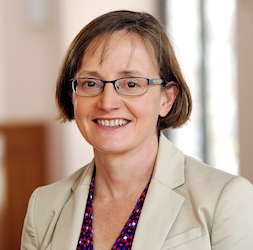 The Aristotle Award was initiated in 1995 to recognize professors who best contribute to the development of the industry’s most valuable resource, its human resource.  This award recognizes SRC-supported faculty whose deep commitment to the educational experience of SRC students has had a profound and continuing impact on their professional performance and, consequently, a significant impact for members over a long period of time.

The list of winners of the Aristotle speaks volumes about the quality of SRC researchers and the high standard set for SRC student. The award has been made to some of the most exemplary university faculty, and this year’s award continues that tradition.  Professor Margaret Martonosi of Princeton University is eminently qualified and has been selected to receive the 2019 Aristotle Award.

Martonosi’ s research interests include computer architecture, mobile computing, and HW/SW interface issues in both classical and quantum computing systems. Her earlier work has included the widely-used Wattch, a computer architecture power modeling and optimization tool and the ZebraNet mobile sensor network project (a precursor to the Internet of Things) for the design and optimization of a real-world deployment of zebra tracking collars in Kenya.

In the words of her nominator, she expertly taught her students to balance innovation with the need for hard, quantifiable, and lasting results.” This has been demonstrated time and again through awards that have recognized research standing up to the test of time.

As an advisor, she has helped shape a new generation of computer architects, including David Brooks (Harvard), Kevin Skadron (Virginia), Carole-Jean W (Arizona St.), and Abhishek Bhattacharjee (Yale). Her mentoring goes beyond just Princeton – in 2006 she launched the ACM Computing Research Association’s Domain Specific Workshops for encouraging and mentoring women and minority graduate students in all areas of computer science. These have given thousands of women and minorities advice, mentoring, and networking in their chosen domains. One supporter noted that she demonstrates a deep commitment to her graduate students and undergraduates as world-class researchers and as human beings. She provides firm yet steady guidance to advance projects and tempers this with patience that allows students to find their own voice. She emphasizes and encourages her students to write and speak well, to represent themselves and their high quality research, and still maintain a healthy work-life balance.