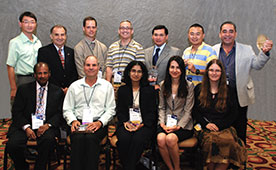 The Industry Liaison Program captures the essence of SRC. It brings together faculty researchers, graduate students, and technical experts from the SRC member companies and provides for interactions that benefit each. The Industry Liaisons, who are at the heart of the program, have three roles.  They provide input and feedback to the researchers in the course of the project.  They act as mentors to students.  And they promote technology transfer back to their company.

The Industry Liaison Program was launched in 1983.  It was so successful that similar programs are also part of FCRP, NRI and ERI.  To date, there have been 3489 Liaisons and Associates, and today there are 763 individuals participating.

SRC strives to make the liaison programs as effective as possible.  In fact, a survey of all liaisons is underway to get input based on experience “in the field.”  If you are a liaison, please fill out the online survey when you receive the email request.

While SRC works to make the program run smoothly, it is really the liaisons who make it work--period. The Mahboob Khan Outstanding Industry Liaison Award, named in memory of a long-time Industry Liaison program advocate from AMD, is presented to those individuals who have made significant contribution to the SRC community in their roles as Industry Liaisons and Industry Associates.  Many Liaisons fulfill their responsibilities admirably.  But some go above and beyond.

As I read the nominations, I was struck by how many mention that the awardee established regular meetings—often weekly—thereby becoming part of the research team.  The result is countless co-authored papers, internships, and job offers!  But perhaps the most valuable result is “relationships”, many of which last long after the project is done and the student is graduated.

This year we recognize 19 of the nearly 800 liaisons and associates.  It gives me great pleasure to present the 2012 Mahboob Khan Outstanding Industry Liaison Awards.

Magdy Abadir, Freescale, was nominated by Professor Li-C. Wang and his students at UC-Santa Barbara and Mohammed Tehranipoor at the University of Connecticut.  Magdy has been involved with Dr. Wang’s group for a decade, which contributed to Dr. Wang receiving the SRC Technical Excellence award in 2010.  He works closely with students, arranging for internships at Freescale and is viewed as their co-advisor.  Meanwhile he lays the groundwork at Freescale to facilitate tech transfer and value for the company.

Khaled Ahmed, Applied Materials, was nominated by Andrew Kummel at UC San Diego.  The nomination especially recognized Khaled’s critical role in defining the research challenge at the outset with Professor Kummel and for his efforts to connect the researchers with AMAT engineers,  for example  through multiple on-site visits.

Kerry Bernstein, IBM, was nominated by Alan Seabaugh, Wolfgang Porod and Robert Dunn at Notre Dame.  The nomination noted Kerry’s vision, which he shares with the entire NRI community, for new technologies that will be key to the future of the industry. He led the initial NRI benchmarking study, which has been critical to the constructive assessment of NRI research results.

Luigi Colombo, Texas Instruments, was nominated by Sanjay Banerjee at UT Austin.  Luigi travels frequently to Austin to meet in person with students, post-docs, and faculty and to discuss on-going research.  He has co-authored 26 publications with UT Austin and UT Dallas researchers.  Not surprisingly, he is co-advisor to a number of students and post-docs and an active member of several thesis committees.

Charvaka Duvvury, Texas Instruments, was nominated by Bob Dutton and (student) Victor Cao at Stanford.  The nomination notes Charvaka’s approach “transcends generations, crosses industrial boundaries and brings out the best in everyone who has the pleasure to interact with him.”

Nagib Hakim and James Tschanz, Intel, were jointly nominated by Subashish Mitra at Stanford and his students Young Moon Kim and David Lin.  Both of these liaisons proactively reached out to Professor Mitra at the outset and have been highly impactful mentors.  Jim Tschanz arranged for Young Moon Kim to do an internship at Intel during which he was able to validate his research.  And Nagib provided enormously valuable data, including multi-core SoC “bug” reports based on Intel data.

Karen Kirmse, Texas Instruments, was nominated by Matthew Goeckner and Lawrence Overzet at UT Dallas and Iqbal Saraf (former student, now with IBM).  Karen uses monthly meetings to participate in the research.  To aid the project, she developed a method for training students in industrial wafer dicing techniques and arranged for an internship for Iqbal at TI.

Eren Kursun, IBM, was nominated by Yuan Xie and his students Qiaosha Zou and Yibo Chen and former student (now associate professor) Guangyu Sun at Penn State.  The nomination recognized the impact Eren had in guiding the research on TSVs, as well as the strong influence she has had on the students.  She is described as “enthusiastic”, “patient”, and “disciplined” and perhaps best of all “a great role model”.

Zhuo Li, IBM, was nominated by Peng Li at Texas A&M.  Zhuo Li was enormously helpful in developing a suite of benchmark circuits based on IBM power grid designs that is now publicly available and widely used.  He also initiated two power grid analysis contests that engage students, not only at TAMU, but worldwide.

Gabriel Loh, AMD, was nominated by Yuan Xie and (students) Jishen Zhao and Matthew Poremba at Penn State.  Weekly meetings have been key to the interactions between Gabriel and the researchers.  In addition, Gabriel oversaw Matthew Poremba’s co-op at AMD during which they made three patentable inventions.

Rahul Rao, IBM, was nominated by Saibal Mukhopa at GA Tech and Chris Kim at the Univ. of Minnesota.  Rahul believes that the role of a liaison is to “guide and assist” the work, not just check on the progress, and both nominators shared how he played an active part in the research and in connecting the team with individuals at IBM.

Seung-Hyun Rhee, GLOBALFOUNDRIES, was nominated by Paul Ho and (student) Linjun Cao at UT Austin and Chong-Un Kim at UT Arlington.  Seung-Hyun Rhee is recognized for his technical contributions, especially for providing test structures to the researchers.  He also is  committed to mentoring the students, which contributed to one student winning a Best in Session award at last year’s TECHCON.

John Rodriguez, Texas Instruments, was nominated by Toshikazu Nishida at the Univ. of Florida.  In his nomination, Dr. Nishida declared John the best industry liaison he had worked with in 23 years!  Once again—weekly calls were at the center of the interaction.  The close collaboration led to a patent application with TI and Univ. of Florida inventors.  John also facilitated three internships for Tony Acosta, who as a result just started a full time job at TI.

Roey Shaviv, formerly with Novellus (now with Applied Materials), was nominated by Joel Plawsky and his students at RPI.  In his nomination, Joel Plawsky recalled, “I first met Dr. Shaviv at TechCon 2010 where he approached my student at his poster. I tagged along to see what was up. Before I knew it, over an hour had passed and we were still talking about the project. Dr. Shaviv grilled us thoroughly and offered a number of very useful suggestions on how we could improve our measurements. Upon leaving TechCon, I was not very encouraged by the encounter or optimistic for our project, but shortly after returning home, I learned that Dr. Shaviv had requested to be a mentor on our project. Looking back, that request was one of the best things to happen to my team that year.”  Roey continues to “grill” the team and offer his insight and guidance.

Savithri Sundareswaran, Freescale, was nominated by David Pan at UT Austin and (former student) Yong Chan Ban (now with Intel).  This partnership benefited from proximity, with many face to face meetings.  And, while not always possible, through Savithri’s efforts, the resulting DFM toolkit was successfully transferred to Freescale and incorporated into the company’s standard design methodology.

LeRoy Winemberg, Freescale, was nominated by Mohammad Tehranipoor and several students and former students at the Univ. of Connecticut (including two, Ke Peng and Xiaoxiao Wang, who now work at Freescale as a result) and Li-C Wang at UC Santa Barbara.  LeRoy was particularly effective at working with the research teams on technology and knowledge transfer. As one nominee noted, industry folks typically are not enthusiastic about taking on a side job working with university researchers on technology transfer. But thanks to LeRoy’s effort, Freescale engineers and managers devoted the necessary resources and made it happen--repeatedly.

Hiroshi Yasuda, Texas Instruments, was nominated by John Cressler at GA Tech and students Kurt Moen, Uppili Raghunathan, and Partha Chakraborty.  Hiroshi’s technical competence, combined with dedication to providing feedback and mentoring to the students is evident in the nomination letters.  His extra effort, such as providing access to TI hardware, made the difference in the outcome of the projects.

In closing— What comes through in each of the nominations is how much the faculty and students value the time and effort that each of you made to not just “track” but to “guide” the research and to foster the development of the next generation of semiconductor engineers and scientists.  On behalf of the students, the researchers, and SRC—congratulations and thank you.