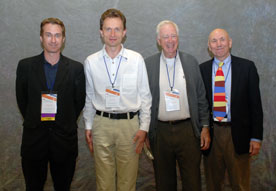 [Note: The following is the presentation of the 2011 Technical Excellence Award by Dr. Venu Menon, Texas Instruments Vice President, at TECHCON 2011.]

The Technical Excellence Award recognizes researchers who have made key contributions to technology that has significantly enhanced the productivity of the semiconductor industry.

This year, the $5000 award is presented for innovative synthesis and verification done at the University of California at Berkeley.

This year’s nomination came from Jason Baumgartner, an IBM Industrial Liaison to the research. To quote from the nomination “SRC projects under the direction of these individuals have been and continue to be exemplary in terms of broad industrial relevance, have yielded outstanding technology transfer and value to virtually every SRC member company, and have been nothing short of awe-inspiring in terms of innovation and following the highest caliber of scientific merit.”

This research has made great strides in advancing the fields of synthesis and verification. Professor Robert Brayton and Dr. Alan Mishchenko’s research has contributed improvements to many products that simply would not have happened otherwise.

Michael Kishinevsky, Intel, says,” this tool [ABC] is used by Intel for both synthesis and verification applications. Just in our lab it is used for five applications; liveness verification, equivalence checking, logic resynthesis, technology mapping, and ECO.”

The support letters for this year’s winners reference the substantial contribution this research has made. Jeremy Levitt from Mentor Graphics notes that  “…the power and performance of our formal verification solutions have been improved as a result of Brayton’s research. We expect to see substantial improvements in the next couple of years.

It is with great pleasure on behalf of the SRC Board of Directors that I award the 2011 Technical Excellence Award to Professor Robert Brayton and Dr. Alan Mishchenko.

Please join with me in expressing your appreciation for the many years of excellence in research for the SRC community.