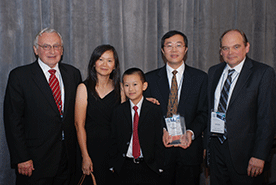 [Note: The presentation of the 2013 Technical Excellence Award was made  by Dr. Rafic Makki, GLOBALFOUNDRIES, at TECHCON 2013.]

The Technical Excellence Award recognizes researchers who have made key contributions to technology that have significantly enhanced the productivity of the semiconductor industry. The fundamental elements upon which the decision is based include: Creativity and Innovation, Relevance, Value to Industry and Technology Transfer.

This year the 2013 honor, along with the $5000 award, is presented to Dr. David Pan of the University of Texas/Austin for his work in the area of “Nanometer IC Design for Manufacturability”.

Professor Pan received his Ph.D. degree from the University of California at Los Angeles in 2000, where he was an SRC-sponsored PhD student and won SRC TECHCON Best Paper in Session Award in 1997. From 2000 to 2003 he was a Research Staff Member with IBM T.J. Watson Research Center, where he served as an active SRC Mentor to various university projects. Since 2003 he has been with Department of Electrical and Computer Engineering, University of Texas at Austin, where he has received early promotions to tenured Associate Professor in 2008 and Full Professor in 2013. Since 2005, he has been the principal investigator of 9 SRC research projects – four of which directly address the nanometer IC design for manufacturability.

Professor Pan and his graduate students have been showered with best paper awards and other prestigious awards/prizes for their research contributions. And as of April 10, 2013, there are over 3,100 citations to Dr. Pan’s publications.

This nomination was submitted by our 2012 Mahboob Khan Award-winner, Savithri Sundareswaran, PhD, from Freescale, with additional support from IBM and Mentor Graphics Corporation.