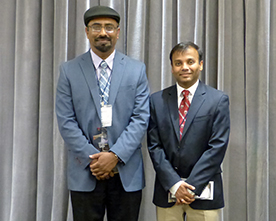 [Note: The presentation of the 2015 Technical Excellence Award was made  by Dr. Mike Mayberry, Intel, at TECHCON 2015.]

Established in 1991, the Technical Excellence Award is an incentive and recognition program for research of exceptional value to SRC members. This prestigious award is shared equally among key contributors for innovative technology that significantly enhances the productivity and competitiveness of the semiconductor industry.

Essential aspects that are considered in the selection process include creativity, relevance to SRC research objectives, value to industry, and technology transfer.

This year, the 2015 honor, along with a $5000 monetary award, is presented to 2 recipients, Professor Muhammad Ashraf Alam from Purdue University for “Reliability Physics of Scaled CMOS and More-than-Moore Technologies” and Professor Subhasish Mitra from Stanford University for “Validation of Multi Core System Technology: QED (Quick Error Detection)

The nomination for Professor Alam was submitted by Srikanth Krishnan of Texas Instruments and included supporting letters by experts from Freescale, GLOBALFOUNDRIES, IBM, Intel, and Micron. The nomination and support of these SRC member companies attest to his intuitive and visionary understanding of ITRS-specific IC and SOC reliability issues ‘years ahead of time’, and his creativity in crafting highly original solutions to emerging challenges. In particular, they all point to the transformative impact of his pioneering contributions to NBTI-aware circuit design, universal scaling of hot carrier degradation, and hot atom damage in ferroelectrics, and how they have informed, impacted, and transformed technology qualification in the member companies.

Professor Mitra’s nomination was submitted by a team from Intel, coordinated by Robert Nguyen, with support from IBM. Other members, including Freescale and Texas Instruments have had liaisons on his research projects in the area of post-silicon validation and that is the focal point of this award, even though Prof. Mitra receives SRC support for work in other areas. Post-silicon validation is a key aspect of ensuring product readiness in the marketplace and has become an area that consumes enormous resources due to the exponential jump in integration and design complexity. Detecting and then localizing problem bugs in the design takes expertise in architecture, CAD, test, as well as application software. His work in this area has led to techniques such as IFRA and QED that have provided a quantum leap in the ability of members to localize bugs in both time and space and his ongoing work in this space continues to push the state-of-the-art.

It is my honor to present this award to Professor Muhammad Ashraf Alam and Professor Subhasish Mitra.