This year, SRC has launched a new initiative to promote its rising researchers called the “SRC Young Faculty Award.”  This award recognizes untenured, full-time researchers that should distinction and novel in SRC funded research. 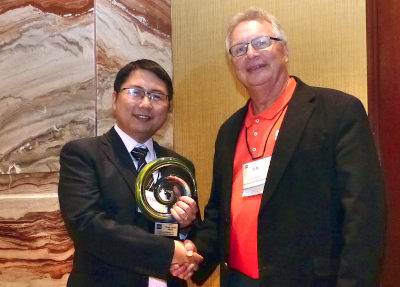 Shimeng Yu is an associate professor of electrical and computer engineering at the Georgia Institute of Technology. He received the Ph.D. degree in electrical engineering from Stanford University in 2013.  He has been PI or co-PI on multiple SRC projects including JUMP, nCORE and GRC.  His cross-layer research program spans from nanofabrication, device characterization and modeling, circuit design and prototype chip tape-out, to design automation for system architecture/algorithms which are highly relevant to the SRC’s mission for developing next-generation computing systems.  He has demonstrated the excellence of research in his early career stage, and has made significant contributions to new applications of NVMs such as deep learning accelerator, neuromorphic computing, in-memory computing, and hardware security.