New SIA-SRC report identifies opportunities for unlocking the next transformative technologies, and warns of the risks of inaction

WASHINGTON—Sept. 1, 2015—A coalition of leaders from the tech industry and academia, led by the Semiconductor Industry Association (SIA) and Semiconductor Research Corporation (SRC), today released a report highlighting the urgent need for robust investments in research to advance the burgeoning Internet of Things (IoT) and develop other cutting-edge innovations that will sustain and strengthen America’s global technology leadership into the future. 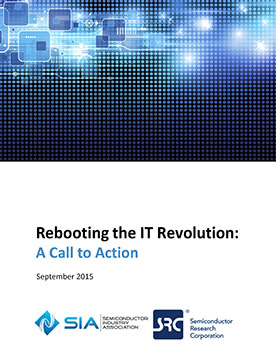 “The United States stands at a crossroads in the global race to uncover the next transformative innovations that will determine technology leadership,” said John Neuffer, president and CEO of the Semiconductor Industry Association, which represents U.S. leadership in semiconductor manufacturing, design, and research. “We either aggressively invest in research to foster new, semiconductor-driven technologies such as the Internet of Things that will shape the future of the digital economy, or we risk ceding ground to competitors abroad. The findings and recommendations in the Rebooting the IT Revolution report will help the United States rise to this bold challenge, choose the right path forward, and harness the new technologies that will keep America at the tip of the spear of innovation.”

Basic scientific research funded through agencies such as the National Science Foundation (NSF), the National Institute of Standards and Technology (NIST), the Defense Advanced Research Projects Agency (DARPA), and the Department of Energy (DOE) Office of Science has yielded tremendous dividends, helping launch technologies that underpin America’s economic strength and global competitiveness. The U.S. semiconductor industry has been a reliable partner in funding research, investing about one-fifth of revenues each year in R&D – the highest share of any industry.

“The IoT — from ubiquitous sensor nodes to the cloud — will be orders of magnitude larger and more complex than anything we know today. Moreover, as the demand for more energy-efficient yet more powerful computing grows, new approaches such as brain-inspired computing have the potential to transform the way systems are designed and manufactured,” said Ken Hansen, president of Semiconductor Research Corporation (SRC), the world’s leading university research consortium for semiconductor technologies. “Addressing the fundamental research challenges outlined in this report is essential to creating the infrastructure that will enable the conversion of data to insight and actionable information with appropriate security and privacy. While some areas are moving forward quickly, others require collaborative research among industry, academia and government to capture the untold benefits of this distributed, intelligent ecosystem.”

The report contains opinions from industry, academic and government leaders who participated in the Rebooting the IT Revolution Workshop on March 30–31, 2015. The workshop was sponsored by SIA and SRC and supported by NSF.

“IoT technology will connect directly to both the physical and social worlds by advancing disruptive hardware, cross-field networking, insight-generating IT, and principles of convergence, which are at the core of future U.S. technology and economic development,” said Mihail C. Roco, Senior Advisor for Science and Engineering at NSF and a key architect of the National Nanotechnology Initiative. “The report’s contents reflect a new way of thinking to create an interdependent, scientific-technological-social ecosystem driven by the emergent confluence of IT with nanotechnology, advanced manufacturing, cognitive sciences, sustainability, and safety. All are in response to an increasingly interconnected, knowledge-driven and demanding society. In the longer term, implementation of the report would support global human progress.”

About SIA
The Semiconductor Industry Association (SIA) is the voice of the U.S. semiconductor industry, one of America's top export industries and a key driver of America’s economic strength, national security, and global competitiveness. Semiconductors – microchips that control all modern electronics – enable the systems and products we use to work, communicate, travel, entertain, harness energy, treat illness, and make new scientific discoveries. The semiconductor industry directly employs nearly a quarter of a million people in the U.S. In 2014, U.S. semiconductor company sales totaled $173 billion, and semiconductors make the global trillion dollar electronics industry possible. Founded in 1977 by five microelectronics pioneers, SIA unites companies that account for 80 percent of America’s semiconductor production. Through this coalition, SIA seeks to strengthen U.S. leadership of semiconductor manufacturing, design, and research by working with Congress, the Administration and other key industry stakeholders to encourage policies and regulations that fuel innovation, propel business and drive international competition. Learn more at www.semiconductors.org.

Celebrating more than 30 years of collaborative research for the semiconductor industry, SRC defines industry needs, invests in and manages the research that gives its members a competitive advantage in the dynamic global marketplace. Awarded the National Medal of Technology, America’s highest recognition for contributions to technology, SRC expands the industry knowledge base and attracts premier students to help innovate and transfer semiconductor technology to the commercial industry. For more information, visit https://www.src.org/.