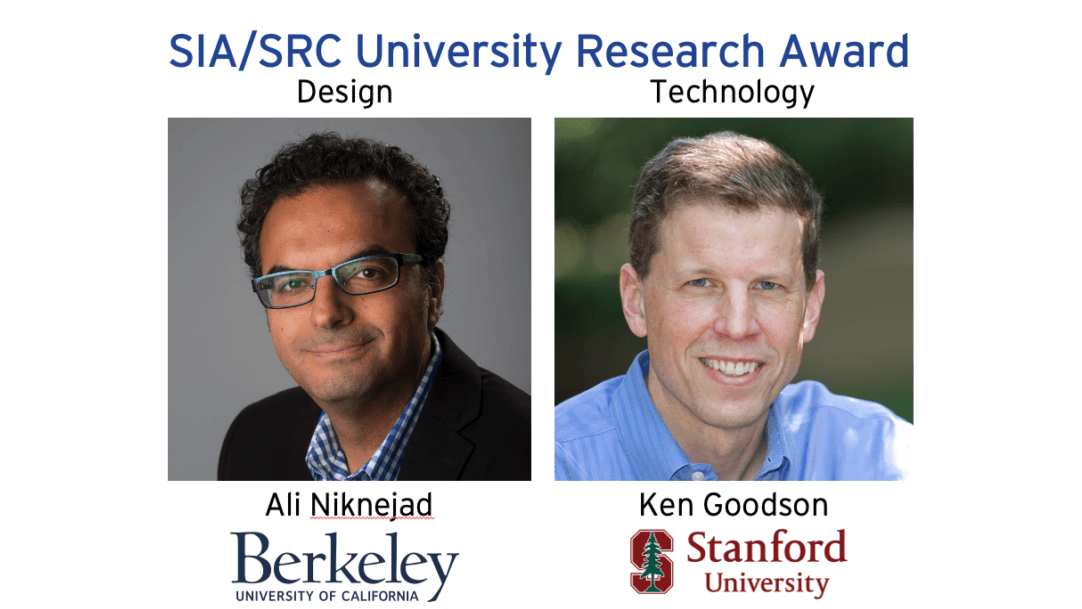 “Research is the engine of innovation in the semiconductor industry, enabling breakthroughs that power our economy and help solve society’s great challenges,” said John Neuffer, SIA president and CEO. “The work of Drs. Goodson and Niknejad has greatly advanced chip technology and helped keep America at the leading edge of innovation. We are pleased to recognize Drs. Goodson and Niknejad for their exceptional accomplishments.”

Neuffer also highlighted the recent release by SIA and SRC of an interim “Decadal Plan for Semiconductors,” a report outlining chip research and funding priorities over the next decade that will help strengthen U.S. semiconductor technology and spur growth in emerging technologies such as artificial intelligence, quantum computing, advanced wireless communications. The Decadal Plan, developed with contributions from a broad cross-section of leaders in academia, government, and industry, identifies five “seismic shifts” shaping the future of chip technology and calls for an annual $3.4 billion federal investment over the next decade to fund semiconductor R&D across these five areas. Every dollar invested by the federal government in semiconductor research adds $16.50 to U.S. GDP, according to an earlier SIA report, “Sparking Innovation: How Federal Investment in Semiconductor R&D Spurs U.S. Economic Growth and Job Creation.”

“Annually, SRC works with its industry partners to select University Researcher Awards in both technology and design that recognize a lifetime of great impact to the semiconductor industry,” said Todd Younkin, president and CEO of SRC. “Drs. Goodson and Niknejad have made tremendous achievements in their fields and are using their SRC-research and collaborative insight to drive next-gen innovations. Both serve as role models, inspiring over 1,700 actively sponsored SRC-graduate students to become future leaders in our dynamic industry.”

Dr. Goodson will receive the honor for excellence in semiconductor technology research. He is being recognized for pioneering work that has yielded a fundamental understanding of heat generation and transport in nanometer-scale transistors, as well as advanced cooling methods for integrated circuits. Dr. Goodson received a doctorate in mechanical engineering from MIT. He is an IEEE Fellow, a member of the National Academy of Engineering, and the recipient of IEEE’s Inaugural Richard Chu Achievement Award in 2018.

Dr. Niknejad will receive the award for excellence in semiconductor design research. He is being recognized for noteworthy achievements that have advanced analog, RF, and mm-wave circuit design and modeling, which serve as the foundation of 5G+ technologies. Dr. Niknejad received a doctorate in electrical engineering from UC Berkeley. He is an IEEE Fellow and the recipient of the 2012 ASEE Frederick Emmons Terman Award for his textbook on electromagnetics and RF integrated circuits.