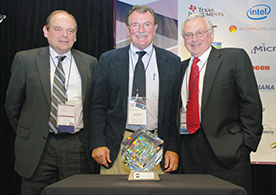 [Note: The following is the presentation of the 2012 Aristotle Award by Larry Sumney, SRC President and CEO, at TECHCON 2012.]

The Aristotle Award was authorized by the SRC Board of Directors in 1995 to recognize professors who best contribute to the development of the industry’s most valuable resource, its human resource.  The list of winners of the Aristotle speaks volumes about the quality of SRC researchers and the high standard set for SRC students.  The awards have been made to some of the most exemplary university faculty in this country, and this year’s award continues that tradition.  Professor Andrew Neureuther is eminently qualified to receive the 2012 Aristotle Award.

The capability to positively impact the lives of their students is a unique opportunity and privilege of university faculty.  This is a high calling that requires that faculty dedicate themselves to the preparation of their students, not just in the sciences, but also to create in them a larger world view on the use of their skills for the well-being of humanity.  The careers of some faculty demonstrate an exceptional and unique commitment to the preparation of their students.  This commitment was clearly recognized by the former students who contributed to the nomination of Professor Neureuther.

Professor Andrew Neureuther has been an inspirational teacher and mentor for nearly five decades of students at the University of California, Berkeley. His exceptional professional contributions lie not only in his pioneering research in photolithography modeling, but perhaps more importantly, in his teaching and training of students, who, in addition to erecting key landmarks on the computation lithography landscape, contributed and continues to contribute to the global leadership of SRC member companies. In those 40+ years he has taught countless undergraduate students, advised 35 Masters’ students, 20 Ph.D. students and published 250 papers.

The letters of nomination for this award from Professor Neureuther’s former students all have glowing praise for his teaching, mentoring and guidance during their years under his supervision. He created for all his students an environment that allowed them to be intrigued, stimulated, inspired, encouraged, mentored, challenged and supported from the beginning of their studies and continuing well after graduation.

While the sheer volume of students that have been guided by Professor Neureuther on this path of higher learning is impressive, what stands out is his commitment to each individual student. Every graduate student receives “face time” with him each week for reviewing the status of their research and generating new ideas.  Andy firmly believes that academic research and industry interaction go hand in hand. Thus, he encourages his students to attend conferences and workshops to give presentations and network with industry peers to learn about the challenges facing industry, identifying areas where academia can fill in some of the blanks. He has always created opportunities and opened doors for his students with industry. He was a pioneer in encouraging students to interact with industry personnel and accelerate technology transfer.  He has considered industrial internship an integral part of graduate training, encouraging each student to spend at least one summer of their studies to an industry internship and helping arrange internship positions for those students. As the size of the semiconductor industry has grown, his group has proven to be one of the best and most sought after sources of young talent for this demanding industry.

One thing that stands out most from all the nomination letters is that long after graduation his students continue to value his advice, mentoring and friendship. Professor Neureuther without a doubt meets the Aristotle standard of “exceptional and unique commitment to the preparation of their students.” Professor Neureuther inspires rather than imposes. He leads by example, subjecting himself to the same rigor as he does others. He considers a piece of research satisfactory only if results are obtained truthfully, existing knowledge is advanced, and sources are properly acknowledged. He is unrelenting in the pursuit of truth and perfection. One nominee summed it up by saying, “Overall, I can think of few professors more deserving of  …. this award.  Andy is one of a kind!”

Professor Neureuther, it is with great pleasure that I present you with the 2012 Aristotle Award on behalf of SRC and SRC members.