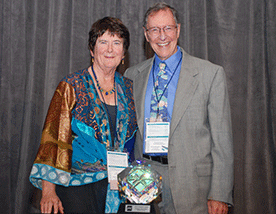 [Note: The following is the presentation of the 2013 Aristotle Award by Larry Sumney, SRC President and CEO, at TECHCON 2013.]

The Aristotle Award was authorized by the SRC Board of Directors in 1995 to recognize professors who best contribute to the development of the industry’s most valuable resource, its human resource.  The list of winners of the Aristotle speaks volumes about the quality of SRC researchers and the high standard set for SRC students.  The awards have been made to some of the most exemplary university faculty in this country, and this year’s award continues that tradition.  Professor James Harris of Stanford University is eminently qualified to receive the 2013 Aristotle Award.

Following his dozen years as a researcher at Rockwell, he has produced 116 PhD’s, working in many diverse areas. Of his PhDs, 64 work in the semiconductor industry (including 7 at Intel, 5 at IBM, 3 at Applied Materials, plus over 20 at start-up companies). Several have started their own companies based on the technology they themselves developed with the roots of this technology going back to their time and experiences in the Harris group. He has also mentored a large group of postdocs, who have gone on to industrial or academic careers. Jim’s academic descendants include over 36 professors now at top domestic and foreign universities; MIT, Illinois, Princeton, Columbia, Cornell, Notre Dame, Oxford, Seoul National, Delft, KAIST and Humboldt, to name just a few. Many of those professors have become SRC funded researchers.

Jim has a gentle, but very deliberate style of mentoring and is known to those in his group as “the Coach”. He supervises graduate students and postdocs from multiple departments – Electrical Engineering, Applied Physics, Physics, and Materials Science. It is this diversity of backgrounds that is the platform for a collaborative and inventive atmosphere of student learning and student responsibility.

Jim’s group structure emphasizes hands-on experience by allowing the students and postdocs to have the unique opportunity to take charge of a piece of lab equipment, ranging from the key molecular beam epitaxy system to photolithography. By owning a piece of equipment they are each responsible for its maintenance and repair along with the training of the next generation of students on its use and care. This hands-on learning approach gives students invaluable experience in fabrication equipment, making key lab improvements, and confidence to tackle any technical obstacle they might encounter.

Jim’s extensive industry connections have allowed him to create opportunities for students to interact with people from industry and research institutions and begin to build a network that will benefit them in both their professional and academic careers. Virtually all of his students receive multiple offers and are heavily recruited.

Jim is known to say that you “never truly escape” from his group. Many of his former students sought his counsel during the telecom bust when they found themselves suddenly unemployed. They returned to visit their “Coach” for a pep talk and to seek his counsel on where to look for jobs. He dedicated much effort going through his enormous list of contacts to help his former students find new positions. This is what separates Jim from just another thesis advisor; he is truly invested in his students and is their advisor for life.

Professor Harris, we applaud you for 30 years of  dedication to teaching, advising and mentoring students and it is with great pleasure that I present you with the 2013 Aristotle Award on behalf of SRC and SRC members.