[Note: The following is the presentation of the 2014 Aristotle Award by Larry Sumney, SRC President and CEO, at TECHCON 2014.] 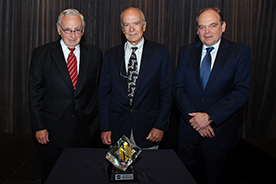 The Aristotle Award was authorized by the SRC Board of Directors in 1995 to recognize professors who best contribute to the development of the industry’s most valuable resource, its human resource. This award recognizes SRC-supported faculty whose deep commitment to the educational experience of SRC students has had a profound and continuing impact on their professional performance and, consequently, a significant impact for members over a long period of time.

The list of winners of the Aristotle speaks volumes about the quality of SRC researchers and the high standard set for SRC students. The awards have been made to some of the most exemplary university faculty in this country, and this year’s award continues that tradition. Professor Dimitri Antoniadis of Massachusetts Institute of Technology is eminently qualified to receive the 2014 Aristotle Award.

Dimitri has been involved in the education of hundreds of students and advised over 50 graduate students. He has a “hard core” reputation for his deep knowledge and demanding courses. He helps to build team dynamics both inside and outside the lab, always suggesting ways that his students can collaborate with other faculty/students in the department and encouraging industrial involvement. He has opened up a wealth of opportunities for his students and helped ensure that they also become future leaders in the semiconductor industry and beyond. To quote Professor Duan Boning of MIT, who began working with Professor Antoniadis as an undergraduate, “From his earliest days at MIT, Dimitri has been incredibly unselfish and tireless in his work to create strong multi-faculty, highly industrial-interactive research programs. Dimitri led the design and implementation of the fabrication facility at MIT we use to this day - the facilities of the Microsystems Technology Laboratories in Building 39. Hundreds, literally hundreds, of students have worked in these laboratories and have taken those skills out to the semiconductor industry with them. By leading and fostering core semiconductor research facilities and programs at MIT and elsewhere, including long-standing SRC device programs and most notably the FCRP center on advanced materials, devices and structures, Dimitri has amplified his impact tremendously. Not only have his own students gone on to university and industrial positions that matter, but Dimitri has enabled and fostered the research of countless other faculty and their students here at MIT and elsewhere.”

Dimitri has launched student after student on their careers, from numerical modeling of oxidation and diffusion, to computer integrated design and manufacture, to new device modeling ideas, to advanced device concepts like SOI, to the extremes of silicon device technology. The mission is always to stretch boundaries, and to develop the fundamentals upon which varied careers can be built. Dimitri truly embodies every aspect of the Aristotle Award, in university positions and in the SRC community, Dimitri’s students are carrying on the mission: to discover new technologies, to advance and solve important problems, and to mentor and teach and inspire future generations of students. With this award we thank you for your many years of dedication to teaching, advising and mentoring students and it is with great pleasure that I present you with the 2014 Aristotle Award on behalf of SRC and SRC members.