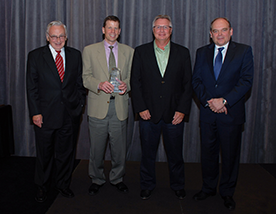 [Note: The presentation of the 2014 Technical Excellence Award was made  by Dr. Ken Hansen, Freescale Semiconductor, at TECHCON 2014.]

Established in 1991, the Technical Excellence Award is an incentive and recognition program for research of exceptional value to SRC members. This prestigious award is shared equally among key contributors for innovative technology that significantly enhances the productivity and competitiveness of the semiconductor industry.

Essential aspects that are considered in the selection process include creativity, relevance to SRC research objectives, value to industry, and technology transfer.

The 2014 honor, along with a $5000 monetary award, is presented to the Stanford University team led by Professor Kenneth E. Goodson for their research, “Micro-scale Thermal Metrologies”.

Over more than a decade-long association with SRC, Professor Goodson and his group have generated a broad and highly distinguished body of work in micro-scale thermal metrologies, contributing immensely to our understanding of the role of interfaces in micro-electronics cooling. He has dedicated a large part of his career to developing careful and sophisticated techniques to study the problem of accurate modeling and assessment of thermal impact of thin-film materials and associated interfaces.

In the course of this work Professor Goodson has graduated a number of students who now hold prominent university and industry appointments, and he has helped transfer both knowledge and metrologies to SRC member companies.

This nomination was submitted by Intel’s Ravi Mahajan, along with additional support from Rama Alapati of Global Foundries and Varughese Mathew of Freescale.