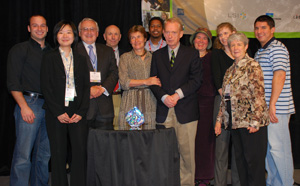 The Aristotle Award is given to SRC GRC-supported faculty whose deep commitment to the educational experience of GRC students has had a profound and continuing impact on their professional performance and consequently a significant impact for members over a long period of time. The Award is intended to acknowledge outstanding teaching in its broadest sense, emphasizing student advising and teaching during the research project thereby contributing to the maturation of the student.

The 2007 Aristotle Award was presented by Larry Sumney at the TECHCON 2007 Conference Banquet. The following is the text of the presentation.

The capability to positively impact the lives of their students is a unique opportunity and privilege of university faculty. This is a high calling that requires that faculty dedicate themselves to the preparation of their students, not just in the sciences, but also to create in them a larger world view on the use of their skills for the well-being of humanity. The careers of some faculty demonstrate an exceptional and unique commitment to the preparation of their students. We are here tonight to acknowledge the contributions of one such faculty member through the presentation of the 2007 Aristotle Award. The Call for Nominations for the Aristotle Award begins as follows:

"A primary goal of SRC is to produce advanced degree students with the capability to work effectively in the semiconductor industry. The Aristotle Award recognizes SRC-supported faculty whose deep commitment to the educational experience of SRC students has had a profound and continuing impact on their professional performance and consequently a significant impact for members over a long period of time. The Aristotle Award is intended to acknowledge outstanding teaching in its broadest sense, emphasizing student advising and teaching during the research project thereby contributing to the maturation of the student."

The Aristotle Award was authorized by the SRC Board of Directors in 1995 to recognize professors who best contribute to the development of the industry's most valuable resource, its human resource. The list of winners of the Aristotle speaks volumes about the quality of SRC researchers and the high standard set for SRC students. The awards have been made to some of the most exemplary university faculty in this country, and this year's award continues that tradition. Professor Wojciech Maly is eminently qualified to receive the 2007 Aristotle Award.

When we construct the speech to present the Aristotle Award, we look for themes in the nomination and supporting letters. What strong characteristics make this candidate stand out from a group of the world's leading faculty? Are there one or two character traits that make this person who he is? In the case of Professor Maly, his supporters agree on those traits: vision, dedication, and the requirement that he and his students live up to impossibly high standards.

Andrzej Strojwas related his experience as a student of Professor Maly's in the 1970's in Poland. "It took quite a visionary to start leading edge research in this domain in Poland. ... I remember climbing the walls with Wojtek to get access to the IC testers at night and jumping from the second floor windows since everything was locked up in the middle of the night. ... Wojtek's absolute dedication to research and devotion to his students" resulted in research that was noticed and eventually led to an invitation from Professor Steve Director to come to CMU as a Visiting Professor. And from another letter: "He is a true visionary. Virtually all the predictions he made 10 hears ago have come to fruition. This keen insight alone, coupled with his ability to share and relate this to his students made my time in school a joy." "Universities need more dreamers like Wojtek who can expand research horizons and excite young talented people to follow these dreams."

"Teaching is his passion and the source of his many successes in the research area. He pursues teaching and student advising with complete dedication and deep sense of responsibility and pride." Several former students spoke of their continuing relationship with Professor Maly. His dedication to teaching and to his students is evident in his methodology, working closely with industry partners so that "his students become highly motivated as they grasp the importance of their research projects beyond simply completing degree requirements." "Tech transfer for Wojtek is not a hoop that one unwillingly leaps through, but a rite of passage that he insists upon." It is interesting to note that Professor Maly's "students" include beginning faculty. Shawn Blanton remembers his first conversation with Professor Maly as a new faculty member. Professor Maly told him "Ninety percent of my advice should be ignored and the remaining 10% may be helpful." "I quickly discovered that he had the numbers reversed, something, I am sure, he would describe as Polish English. ... But he challenged me to work long and hard and inspired me to pursue research areas that I would not have otherwise considered."

And finally, this impossibly high standard of performance. Tom Story recalled returning to CMU to pursue his PhD after 18 years at IBM and said of Professor Maly, "I found that even after working for 18 years, I was not too old to have a hero. Wojtek matched all his brilliance with at least as much dedication and commitment to producing a high quality result. This man was tireless and relentless in his pursuit of excellence in whatever he or his students undertook." "Wojciech always led by example. He worked long hours and harder than any graduate student. He demanded that publications and presentations were always professional and high quality." "He is a perfectionist so being his graduate student has never been easy. His students take longer to finish their dissertations than for most other faculty but after they're finally done, they are really 'polished products.' Anne Meixner recalled a time that Professor Maly "burst into our office and confessed that he had realized that what other professors gave as a PhD thesis he would have only considered a master's project." She continued, "As a result, I believe Wojtek's students are better prepared to deal with the complex challenges in the semiconductor industry."

Vision, dedication, high standards coupled with "high standards of intellectual honesty and forthrightness" are undoubtedly qualities that make Professor Maly the outstanding teacher that he is. One former student summed it up this way, "renewed in spirit, possessing a global perspective, vastly technically improved, and better equipped to solve problems through the application of fundamental concepts. All of these gifts I owe to Professor Maly." Professor Maly, it is with great pleasure that I present you with the 2007 Aristotle Award on behalf of SRC and SRC members.